Back to top
Skip to content
© 2022 Charm City Hemp. All rights reserved. 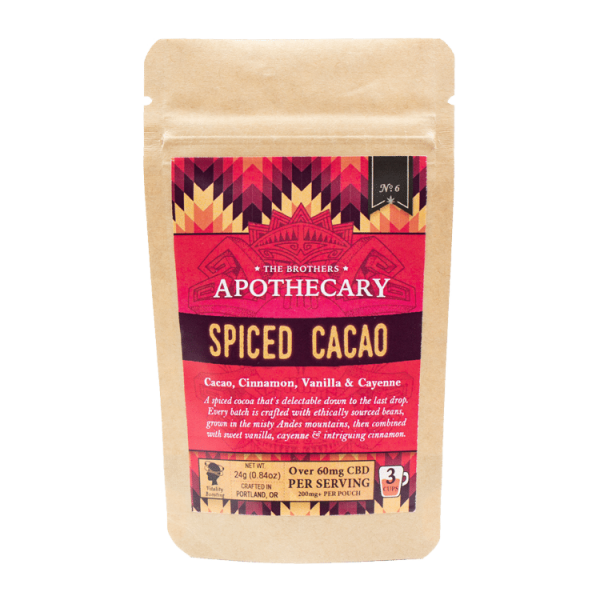 Alluring Cacao with a Kick
Spiced Cacao is a uniquely rich, distinctly spiced cocoa that’s inspired by traditionally recipes. Made with Peruvian cacao, coconut, bold spices, and a touch of sweet.

What does Spiced Cacao taste like?
Cacao is generally more bitter than cocoa. Cacao is processed at much lower temperatures than roasted cocoa, then fermented to develop flavor. Many liken the punchy aftertaste to that of espresso beans, with a distinct aroma and chocolatey character.

We combine this with coconut milk powder, low-glycemic coconut sugar, and a set of seven unique spices, including ginger, cayenne, cinnamon, nutmeg, allspice, and clove. The result is a smooth, chocolatey and semi-bitter drinking chocolate that is perfect for those chilly Autumn and winter nights.

What makes Spiced Cacao special?
Our Spiced Cacao exclusively uses cacao sourced from the Andes Mountains, grown in Peruvian farming cooperatives and harvested/dried according to traditional preparations. 5% of all sales goes back to social equity and environmental projects.

Plus, because cacao is processed at ultra-low temperatures, it retains a much higher nutritional profile when compared to cocoa. Combining this with organic ginger, spices, and organic coconut (plus CBD), makes this a uniquely dense superfood drink.

When should I drink Spiced Cacao?
Spiced Cacao is a perfect anytime drink, but it’s worth noting that cacao is used as a stimulant, mood enhancer, and often produces a euphoric experience. Unlike our Blue Moon Milk, this isn’t intended for right before bed, and makes a better complement to your morning or mid-day routine.

What is the history of cacao?
The Olmecs (1500-400 BC) are generally the first peoples’ assumed to have enjoyed the cacao by grinding the beans, adding water, spices, peppers & herbs, though it has more recently been reported to have been used in some form in Ecuador, around 3430-3300 BC, predating its earliest known use in Central America and Mexico by approximately 1500 years.

Throughout history, cacao has near universally been revered as a ceremonial food and beverage, at times being worth more than gold and even used as currency. It was highly prized, often only consumed by the elites during rituals or ceremonies, such as during funerals or feasts. In the 1500s, cacao was introduced into the Court of Spain, and began being combined with vanilla, sugar, and cinnamon. Over the course of the next centuries, cacao has been transformed into the many varieties we see today, from Parisian milk chocolate to being combined with hazelnut in Switzerland.

Spiced Cacao captures an eclectic blend of this history. At the core it pays homage to its origins, exclusively using Cacao grown and harvested in adherence to traditional methods, directly from Peruvian farming co-operatives. The recipe then acknowledges the flavors of early-European influence, just without the overtly sweet profiles so popular in European culinary creations. Across the board, the ingredients are sourced from organic and fair trade suppliers, with 5% of sales going back to South American social and environmental projects, in the communities we owe this (and many other) fantastic recipe and inspiration to.